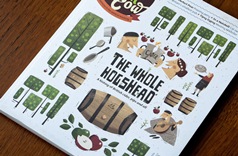 Issue 2 of Hot Rum Cow, the 100-page quarterly magazine about adventures in the world of booze, is out now.

For Issue 2 we’ve worked our fingers to the bone, put our livers on the line, and squeezed our collective creativity until the pips squeaked. The result is a magazine with more apple than the Garden of Eden. To be specific, more cider than a Wurzels gig.

We delve into more than 2000 years of cider history, speak to the Thistly Cross team about the joys and trials of producing cider in the home of whisky, and reveal how Americans are falling back in love with the original American spirit, Applejack. We’re drinking cider, we’re cooking cider, we’re shooting it and defining it. We’re even seeking out its timid cousin, perry.

Away from the apples we meet “gypsy brewer” Mikkeller in Copenhagen, go behind the scenes at the International Wine and Spirits Competition, squeeze into Britain’s smallest pub and talk cocktails with John Shuttleworth.

“Hot Rum Cow is for people who are enthusiastic and curious about what they’re drinking. We celebrate the stories and personalities behind unusual drinks from around the world, and champion high-quality beers, wines and spirits from independent producers,” says editor, Simon Lyle. “And we present all this beautifully, with lavish design and some stunning specially-commissioned illustration and photography.”

So who is the magazine for? “People like us – consumers who enjoy good drinks lovingly made by passionate people and want to know the stories (and histories) behind them,” says publisher, Fraser Allen. “None of us are connoisseurs but we’re all curious (and enthusiastic!) drinkers.”

Issue 2 of the magazine – the first news-stand title from Edinburgh-based White Light Media – is available to buy now in selected London newsagents or direct from www.hotrumcow.co.uk. An iPad app edition is also available from iTunes: tinyurl.com/cu893b5