As Chile is South of the equator but bears a similar climate to France and California it has a unique advantage over other wine growing countries. Their summer is between November and March allowing them to harvest wine during the ‘off-season’. As a result, this South American country can produce wine for the global market when others can’t.

This has served Chilean wine producers well since vineyards were first planted in the mid-16th century. By the mid-18th century the country saw the arrival of the Cabernet Sauvignon and Merlot grape. However by the mid-20th century the industry for a period became stagnant and produced inferior wines. But a 21st century renaissance has seen vintners produce world-class products which have taken several major prizes in recent years. 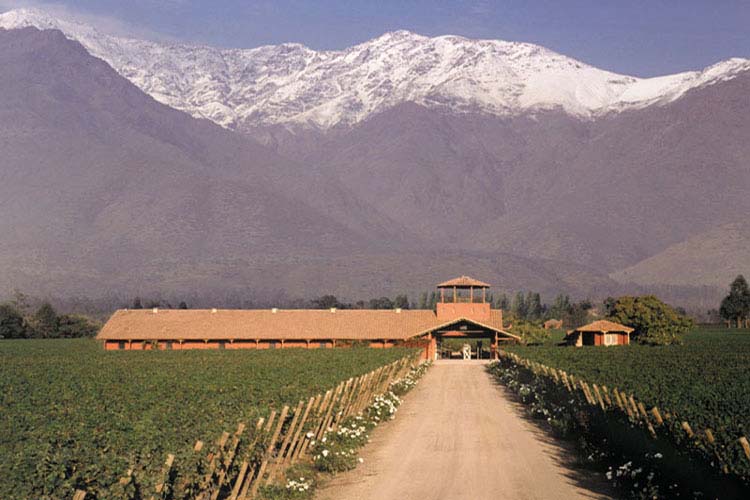 Chile’s wine growing regions are divided (like France’s appellations) into several viticultural areas running from North to South along its South American sliver of land. Some lie in a fertile central plain 750ft above sea level whereas others lie close to the Andes mountain range. The area has seen significant growth recently, expanding from twelve to over seventy wineries.

Because of its unique geography and blessed with the right climate, the country wasn’t affected by the phylloxera louse which devastated many European vineyards. When France and others nations sought to rebuild their industry in the 1870’s, they had to import much of their stock from Chile.

Not only is the weather there similar to France but many of the names would be immediately recognized by vintners there: Pinot Noir, Cabernet Franc, Semillon, Sauvignon Blanc and Chenin Blanc to name a few. German varieties are also represented: Gewürztraminer and Riesling are plentiful there too.

The reds of Chile have in many cases (pun intended) become the country’s most notable exports. The country is the fourth largest exporter of wine to the United States. This is a significant distinction considering the States possesses a large wine industry of its own. In 1998 Chile exported 5.3 million bottles to the country and this figure has increased ever since.

Many of these premium wines come from vineyards sited in cooler areas with poorer soils. Alongside modern pruning techniques, the combination of these factors concentrates the flavours. Utilising stainless steel fermenting tanks alongside French oak barrels has turned Chilean wine into a world-class product.

In the Apalta Valley for example conditions are ideal for Merlot, Syrah and other favourites of the Californian market. Produced from grapes grown on 50-year-old vines in sandy soil they compete with the best wines anywhere. Those seeking superior full-bodied wines still look for the Montes Alpha ‘M’ designation.

Whilst still small in size and at around 2,500 hectares under cultivation, Chile can still produce one of the finest Syrahs anywhere. The peppery product from the cooler Elqui Valley is the envy of vintners from Australia to California. The warmer, southern Colchagua region offers a fruity version that competes well with those of the Hermitages of France.

With the shackles of its past now receding from memory, Chile is poised to take its proper place among the major quality wine producers of the world.

Beer Pairing: give wine the night off

Why whisky and water should always go together

For the love of port!