close
From click to clink, the best deals on the web
Nowhere in France is the terroir concept a group of vineyards (or vines) from the same region that share similar soil and climate more dearly held than Burgundy.
Located in central east France, the region’s 1.6 million inhabitants endure cold Continental winters, but enjoy warm summers. 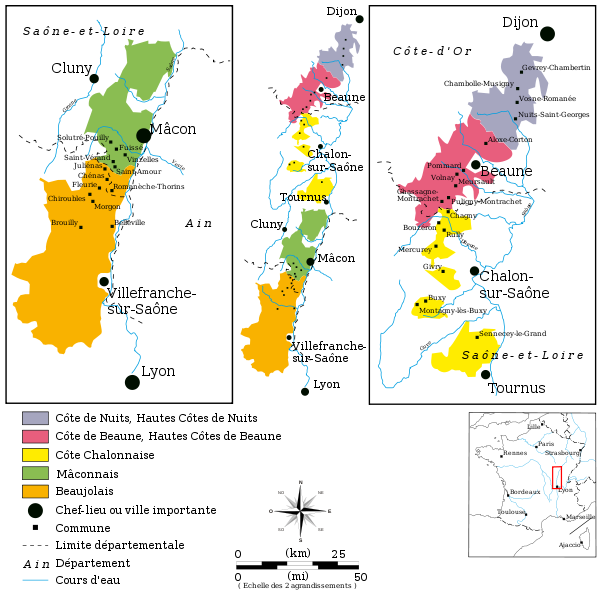 A region covering 31,500 square kilometers (over 12,000 square miles), Burgundy (Bourgogne) is rich in world and winemaking history. In this 360 km (225 mi) strip stretching 100km (60 mi) south of Paris, down from south of Dijon to north of Rhone, can be found 99 different wine appellations.
Here over 180 million bottles of some of the world’s finest wines are made   from the full-bodied reds Pommard and Corton to the medium Beaune  to the world class whites, the dry Chablis or Chassagne Montrachet.
As a consequence of the French revolution, the monastaries’ vineyards were confiscated, resulting in fragmentation into the system of small plots that prevails to this day.
Six hundred of the vineyards there merit the appellation ‘Premier Cru’, which designates the finest quality wine. Only 33 can boast the even more exclusive ‘Grand Cru’ label, among them the supreme Montrachet, Chambertin and Clos Vougeot.
Burgundy reds, from the pinot noir grape, pair superlatively with Boeuf Bourguignon or pheasant, while a Chablis or other white is delightful with everything from shrimp to goat cheese.
The Chablis, derived from the famous village of the same name, makes a brisk dry, white, with refreshing acidity. The Chardonnay grapes here grow in limestone rich with fossil remains.
The world famous Beaujolais, with its fruity flavor from the Gamay grape grown in granitic limestone, can accompany lamb or grilled chicken.
In Volnay, the delicious eponymous red has been made for eight centuries. On a sliver less than 600 acres are grown Pinot Noir that produce 1.3 million bottles of this elegant wine with its aroma of raspberry and violets.
For the lover of the finest whites, turn to nearby Meursault with it’s Premier Cru label. Chardonnay, grown on just over 1,000 acres of limestone and marl, form the basis for 2.5 million bottles of a dry white that can be aged from 3 to 15 years. With its aroma of almond and apples, pair with a fish in white sauce.
But the ‘pièce de résistance’ is the red Pommard, with its tannic, robust flavor, making a comeback after some decades of decline. Here 1.8 million bottles, with aromas of black cherry and black currant, are produced from a mere 780 acres of Pinot Noir grown in limestone and red clay. Excellent for aging from 5 to 15 years, it pairs well with game venison or roast red meat, with a side of Livarot cheese.
Whatever your preference, you can never go wrong with a Burgundy.
Previous Post
Next Post