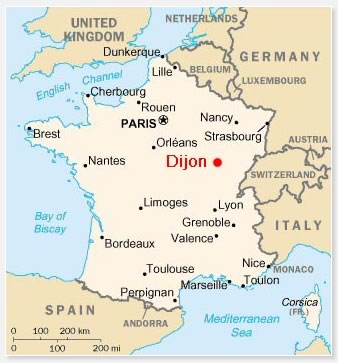 For a while it was the most infuriating place, with too much poor, thin wine undermining the name Chambertin; now it’s back on form and flexes its muscles in that Gallic way, as if to say ‘I am Chambertin; don’t mess with me’.

In each edition of Wine By Numbers, we’ll take a number pretty much at random from the world of wine and look at where and how it fits in, hopefully entertaining you at the same time.

In this edition, we’ve gone for the number D-122, the name of a minor road in eastern France. It runs from a small city famous for mustard and not much more, Dijon, to a small town famous for great restaurants and not much more, Chagny. Doesn’t sound like much, but the countryside between Dijon and Chagny is better known as the Cote d’Or, and the D-122 is better known as the Route des Grands Crus. It runs through some of the most fabled wine country on our planet.

Now it’s true that you can drive the 60km length of the road in under an hour. On the other hand, you can do what I did and take a week to cruise it, stopping frequently – sometimes in the vineyards themselves – to take in the fresh air, feel the soil and touch the vines, and have a picnic. Your choice of vehicle is important here – some say a sports car for posing in Vosne-Romanee or Beaune, some say an open-top car for feeling the wind in your hair; I say a hire car, because then you don’t mind bumping and scraping your way into yet another world-famous vineyard or Clos to spend an hour or two in perfect surroundings, devouring another picnic.

The Cote d’Or has two parts. The first, the Cote de Nuits, covers the first 15 miles south of Dijon to Nuits Saint Georges. The second, the Cote de Beaune, begins at Aloxe-Corton and runs 20 miles further south to the Santenay vineyards.

Each part of the Cote d’Or is defined by low-lying hills, facing south-east. It’s this orientation, and the specific soil profiles, that provide the perfect conditions for great wines. The sunshine is pretty abundant but not too hot; the soil is neither too rich nor too poor, often just a thin layer of clay with mineral subsoil; and the drainage is rapid, sometimes too rapid – after prolonged rain you’ll often see precious topsoil being carted back up the hill and spread among the vines.

Three hundred years before that, the Abbe de Beze grew vines within the abbey’s sanctuary walls; those walls still enclose the Clos de Beze vineyard. This is just one example of the many tiny plots of Grand Cru land that are entitled to use Chambertin in their name. For a while it was the most infuriating place, with too much poor, thin wine undermining the name Chambertin; now it’s back on form and flexes its muscles in that Gallic way, as if to say ‘I am Chambertin; don’t mess with me’.

Next on the D-122 is Morey-St-Denis, once the meat in the Chambertin/Chambolle Musigny sandwich. Now it makes meaty wines of its own in five Grand Cru vineyards, the Clos de Tart, de la Roche, St-Denis and des Lambrays along with Bonnes Mares. Some of the wines welcome you to their bosom like a glamorous and voluptuous aunt, others are austere, stand-offish, like a stern uncle recently retired from the army, but all are full of character and have a chocolatey, licorice depth that rewards patience. 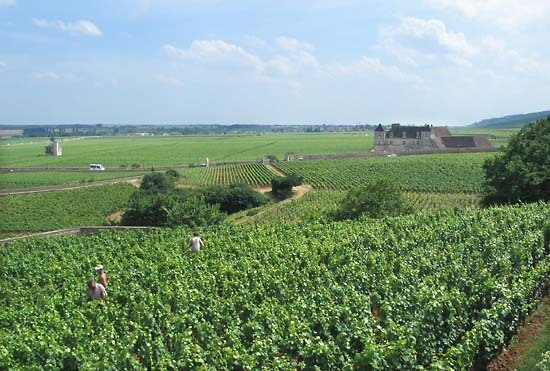 Next stop Chambolle-Musigny is said to produce the most fragrant wines in all of Burgundy. To my mind, the jury is out. Some wines, for example those from le Musigny, can set the heart aglow; but the impression of flirtatious femininity often ascribed to these wines may be based more on names such as les Amoureuses and les Charmes, rather than the wines themselves. The vineyards, though, are well-sited and the potential for beautiful wines is there – no doubting that. The enclosed vineyard at the Clos de Vougeot, its 124 acres divided between dozens of owners, is the perfect place to stop and enjoy your picnic.

Vosne-Romanee is next, my own favourite and home to probably the most renowned holdings in the whole of Burgundy, the Domaine de la Romanee-Conti. Their Grands Crus include La Romane Conti, La Tache, Richebourg and Romanee-St-Vivant, while just next door are Echezaux and Grands Echezaux. Here you can spend a couple of very happy hours walking the ancient road and the tracks that lead off it, locating the Grand Cru and Premier Cru vineyards that are each world famous. All of Vosne-Romanee’s AC vineyards are to the west of the D-122, that is to say on the best side of the road.

One of the wine world’s most exciting experiences

Let’s keep this simple – the incomparable mix of exciting red-fruit ripeness, the delicious tangle of spices and wood-smoke that eventually ages to the deep, deep pleasures of lush prunes, soft brown sugar, chocolate, that particular autumn-damp decay, well-hung game – all of these combine seamlessly to make Vosne-Romanee red wine one of the wine world’s most exciting experiences. In good years, make sure the bottle has at least six years of age; but whatever you do, add Vosne-Romanee to your bucket list. It’s that good.

All of Vosne-Romanee’s AC vineyards are to the west of the D-122, that is to say on the best side of the road.

Nuits Saint Georges completes this leg of the journey, home to no Grands Crus but to many (38) Premier Crus, more than any other AC, and hence in many people’s opinion representing some of Burgundy’s best value. It’s certainly one of the more reliable village ‘names’ in Burgundy. True, the wine can be slow to open out but after about five years it shows a lovely, quite astringent plumskins sort of chewiness which ages further to a deep, fig and prune and chocolate smokiness. Of all the top villages, it’s the one more likely to retain a savoury edge as it ages.

We continue on the D-122 to the Cote de Beaune.