Well, maybe not always. Comedian Chic Murray’s quip that,  “there are only two rules for drinking whisky, first never take whisky without water. Second never take water without whisky” should not be taken literally, but it does say a lot about how the ‘water of life’ should be imbibed. The Drinks Cabinet meets up with a Scottish businessman who has turned this piece of received wisdom into a compelling set of products that could soon be appearing at a whisky tasting near you.

There are many ways to tell a seasoned whisky drinker from one unversed in the ways of the Scottish national drink. The minefield of pronunciation (Bruichladdich anyone?) asking for a mixer or downing the stuff like tequila are all common rookie errors. However the one sure fire way to tell if someone is new to the spirit is whether the drinker  is aware of the fact that water and whisky are meant to go together.

Water and whisky: a must mix

It’s a simple fact that whisky experts, distillers and old men in pubs will all tell you. Namely that mixing whisky and water is not an option, but a must. You just need to hold up your glass to the light to see the impact that a small dash of water can make to this complex drink.

Those more in the known will tell you that this is down to a chemical reaction releasing oils and flavours within the spirit. 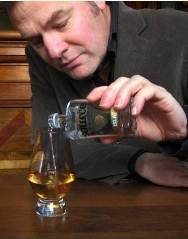 Graeme Lindsay is Managing Director of Uisge Source, a start up that means to turn this widely held consensus into a smart new product: water bottled in Scotland’s main whisky regions designed to complement single malts.

“Whisky is rare and precious and so is this water – the water from our sources is rare and it has to be presented in a way that reflects that,” says Graeme of the neatly packaged glass bottles of water he presents to The Drinks Cabinet.

However the man behind this new brand is clear that whisky is about individual taste, so there’s no “correct” amount of water to add, and this should vary for each malt and drinker.

“I’ve seen master distillers add lots of water to their whisky, in order to test their spirits and write up tasting notes, they add water to open up their whiskies, and a whisky enthusiast will obviously want to enjoy it in the same way,” he points out.

What is important, and this is where the idea behind Uisge Source is about more than just selling water in expensive looking bottles, is where the water comes from.

It was Graeme’s experience in the increasingly global world of whisky drinking that first revealed this gap in the market.

“I worked in the industry for about 10 years ,” says Graeme, “I was doing a lot of tasting events and overseas travel. I noticed that at these events, the water was an afterthought – often they would be using local tap water – or sometimes bottled water, but we didn’t know the origin.”

“Quite often this would taint the flavour of our whiskies. Sometimes I’d notice that the same whisky would change its flavour depending on where we were,” he adds.

There’s a long history of providing water to drinkers from the same source used by distilleries. It’s thought that in the early days of the industry, loyal customers would be provided with water from the local spring by distillers in bottles. As the whisky industry was really taking off in the nineteenth century major figures such as James ‘The Major’ Grant would hold tasting events next to the burn that supplied his distillery, proudly giving them a splash of exceptional fresh water with their dram.

There is widespread agreement that water from near a distillery is superior for mixing with the whiskies from that distillery, as Graeme explains: “Intuitively that makes sense; you’re adding more of the same; in a sense you’re retaining the true character of the spirit. Essentially Uisge Source provides whisky lovers with a range of different waters that match the chemistry of the waters used by distilleries in the main whisky regions.”

Each of the Uisge Source waters offer different characteristics that are influenced by the geology the water has filtered through. In the same way that whisky matures in casks and takes flavours from the wood, water takes minerals from the rock strata that it can spend many years filtering through.

So, the Islay water has a higher natural acidity thanks to filtration through peat. Many distilleries in the Highland region use hard water which has filtered through brittle rock such as red sandstone and limestone.  Uisge Source Highland from St Colman’s Well in Ross-shire has a very high mineral content which matches the chemistry of the water used by the Highland Distilleries. Most Speyside distilleries use very soft water, that is low in minerals like Uisge Source Speyside from The Cairngorms well, one of the highest natural mountain springs in Scotland.

At the same time, as distillers produce more and more cask strength whiskies (which often have a ABV well above 40%) accompanying water is becoming more and more important.

As Graeme points out, like every aspect of whisky drinking, provenance and heritage are key.

“Whisky drinking is about discernment and appreciation – there’s a ritual around the art of consuming and appreciating a whisky – having the right glass, making sure the spirit is at the right temperature, and of course the water itself,”  he concludes.