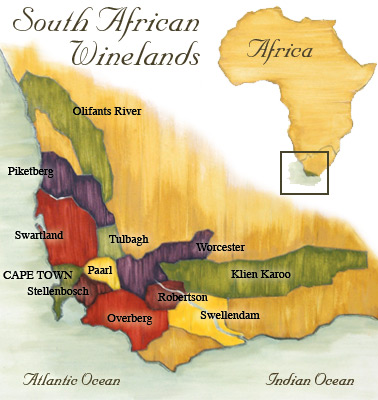 By international standards, South Africa is a small producer: only 1.5% of global plantings; slightly over 105,000 hectares (260,000 acres). But recent years have seen significant growth, with over 140 million liters exported per year from 830 million liters produced.
A producer of both whites and reds, 80% of new plantings are Shiraz, Cabernet, and Merlot and a sprinkling of others. Over 20% of the white is predominately Chenin Blanc, and white varieties are still in the far majority.
Though new to the international scene, South Africa has been under cultivation for 350 years, since the arrival of Dutch settlers. With 60 appellations, the area has fewer than a dozen major regions.
The Cape area has seen vintages since the arrival of Europeans, with the Stellenbosch region serving as the modern hub of production. Though the region knows several common varieties, it also produces an indigenous hybrid called ‘pinotage’, which is well suited to local conditions.
Walker Bay is one of the newer, cooler areas on the Whale Coast south of Cape Town. Classic Chardonnay and Pinot Noir form the bulk of the production here. To the north is Swartland, where rainfall is limited so efforts are fed mostly by artificial irrigation. 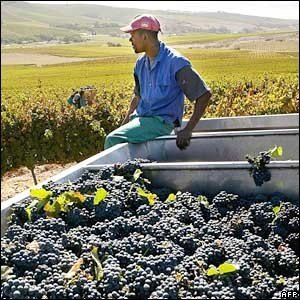 In the suburbs is the small Constantia, where vineyards reside on the slopes of the eponymous mountain. The historic center of winemaking, it boasts a Semillon made from ideal climatic conditions.
East of Stellenbosch is Elgin, where the high altitude produces cooler temperatures than most other regions. Inland to the west, surrounded by the Drakenstein mountains, is the Franschoek Valley. Blessed with high rainfall and hot periods, the variety of soils combine with the climate to make perfect growing conditions.
To the north-west, Paarl houses many of the leading South African producers. Traditionally given almost exclusively to white, political and economic changes have encouraged the vintners to turn their efforts to red. The Mediterranean climate helps those efforts. Hotter than Stellenbosch, Paarl produces some of the best South African wines.
Durbanville vineyards, on the hills of north-east Cape Town, have been producing wine for nearly 300 years. Today, both red and white are well represented between a stellar Sauvignon Blanc and an excellent Shiraz.
But South African conditions don’t merely emulate the Mediterranean. The Klein Karroo is a semi-desert region where muscatels and Portuguese port is produced. 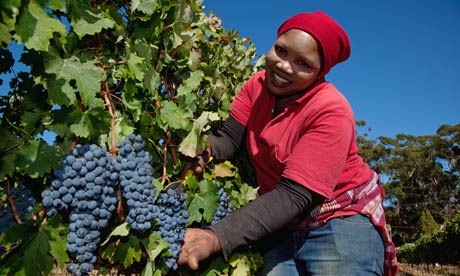 Robertson, 120km (72mi) form Cape Town, lies along a fertile and warm valley. Chardonnay and even sparkling wine are made here. Like other regions, red is becoming more popular, with the main effort being Shiraz.
Hot Worcester, near Robertson, and the surrounding area forms 20% of all South African vineyards, despite the long distance from Cape Town. Here, brandy is one of the chief products.
While politically the country’s fate is always an open question, their winemaking efforts show a commitment to quality second to none. With the substantial investments made over the last few years, several vineyard’s results are set to enter the world stage.
Previous Post
Next Post