Famous for its fiery and peppery flavour and for being the only distillery on the island of Skye, Talisker whisky has a distinctive charm that has remained strong despite a turbulent history.

The Talisker distillery grew out of the collapse of the Hebridean whisky industry in the 1830s. Before then, there had been several distilleries in production, but the combination of the remoteness of some of the sites and a crackdown on illegal distilleries, had proven to be disastrous for the industry. 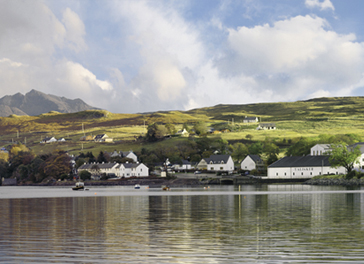 Brothers Hugh and Archie Macaskill, took the business opportunity to move to Skye and convert Talisker House into a legal distillery. But it struggled for many years until it was saved by Roderick Kemp and Alexander Allan in 1881. They saw the potential for Talisker and expanded the distillery.  Kemp left the distillery in 1892, leaving Allan to merge Talisker with his other distillery to form Dailuaine in Speyside, which at the time was the largest whisky producer in Scotland.

Despite a devastating fire in 1960 forcing the distillery to close, Talisker was rebuilt and continued to go from strength to strength.

After the fire, five replicas of the original stills were built to make sure the original Talisker flavour was preserved. A still has three sections; to heat up the liquid, to condense the water vapours and a section to cool and trap the alcoholic vapours. The lye pipes, leading off from the main neck of the stills used for Talisker whisky are U-shaped, so that they trap the vapours from the first distillation before they reach the outside worm tubs. A secondary copper pipe then carries the vapours back to the wash stills for a second distillation. This double distillation gives Talisker whisky its distinctive rich, deep full flavour.

Talisker’s soft, peaty process water is drawn from 21 underground springs that rise from Hawk Hill beside the distillery. These same springs have been used at Talisker from the very start of its production.

Talisker now boasts an annual output of three and half million litres of spirit. The current owners, Diageo, have added a visitor centre to the distillery and it is now one of the most visited island distilleries in Scotland.

Talisker distillery has survived through war, fire and almost financial ruin. But despite all this and its remote island setting, it has kept its fighting spirit and continues to produce fine whiskies to charm for years to come.