As the memory of Robert Burns is kept alive in every corner of the globe, The Drinks Cabinet takes a look at one of the poet’s key sources of inspiration: whisky.

But it wasn’t always thus. The status of whisky during Burns’s lifetime was a matter of fiercely contested politics within the relatively young state of Great Britain. The bard would pen many a stanza in praise of his native tipple: “guid auld Scotch drink!” and be equally prepared to damn those who sought to tax it.

It’s hard to imagine today that this spirit – named by the Gaels as uisge beatha or ‘water of life’ was once frowned upon as the drink of paupers and rebels. 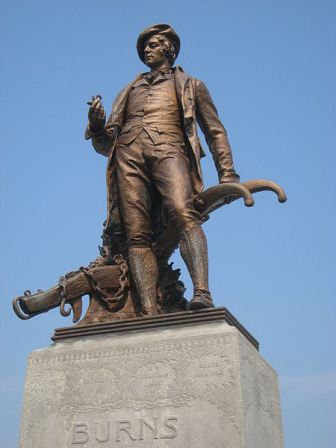 While the Scots nobility were busy getting ‘reekin’ (drunk) on expensive French claret, the impoverished Scots peasantry (of whom Burns, the ‘heaven taught ploughman’ was one) had to make do with more rough and ready intoxicants.

If the poor wanted a dram their options were to either buy from one of very small number of legal distilleries – who distilled poor quality grain spirits, or to keep it local, cheap and illegal.

Part of an age old rural tradition, the pot still was a small mobile piece of kit that could be easily hidden from the taxman. Local water, infused with the flavours of the local landscape, was used to make vast quantities of tax free spirits. It was these ‘illicit stills’ that would come to play a defining role in the character of Scots whisky.

The Author’s Earnest Cry and Prayer

The often violent clamp down on this method of whisky production is the subject of an early polemic by Burns The Author’s Earnest Cry and Prayer:

Is there, that bears the name o’ Scot,
But feels his heart’s bluid rising hot,
To see his poor, auld Mither’s pot
Thus dung in staves,
An’ plunder’d o’ her hindmost groat,
By gallows knaves?

As the poem shows, homemade distilling was an integral part of Scottish communities and families. What’s more Burns is keen in his appeal to the British authorities to remind them of the Scots’ famous reputation as fierce northern recruits for the British army. This fiery spirit, he concludes is thanks to a dram or two.

In the end the poet, after failing the extremely trying occupation of a tenant farmer, turned excise man himself. Although this decision may have weighed heavily on him, he probably had few other options. Yet this didn’t stop him penning his epic tale of drunken debauchery Tam O’Shanter, which draws heavily on the drinking habits of his native Ayrshire.

Burns had been dead for two decades before the British government passed the Excise Act in 1823, allowing previously illegal stills to produce whisky under license. A year later The Glenlivet became the first legal single malt to go on sale, and it is still held up as one of the finest of its kind.

There can be little doubt that the vast array of quality distilleries and the unparalleled status of whisky around the world would have filled the ever patriotic Burns with pride, and perhaps the odd target for his wit and canny opportunism.

The legacy of Burns has often been fought over – for some he was a feckless, romantic drunkard, for others an enlightened thinker whose influence on modern culture was greater than any other single writer.

Yet, contradictory though those two pictures might seem, there is equal truth in both of them, and it was Burns’s honesty about his own frailties and those of the society around him that marked him out as a truly great poet.

There’s no shortage of ‘Robert Burns’ themed whiskies: however many of them are simply cheap labelling ploys to distract buyers from a poor quality blend. Here are a few great malts that we think Burns would have happily pocketed in return for some oversight in his tax gathering duties.

Aged in oak casks for 15 years this whisky is one of the best within its price range and is popular at home and abroad. It is smooth, accessible and full of character.

This lighter, medium bodied Islay malt evokes a real earthiness without the lumbering peatiness of many offerings from Islay.

The king of the lowland distilleries, Auchentoshan Distilliry is situated on the edge of Burns country, and its distinctive offerings are crafted in a distillery founded in 1823.