Tradition and innovation have come together in one of Spain‘s little-known wine regions to produce some startling new wines. 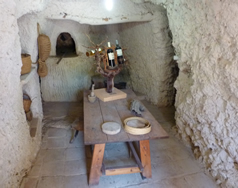 When Pedro Jose Martinez first began producing wine three generations ago, his winery was little more than a cottage industry. Or to be more precise – a cave industry; since Pedro lived with his family in a simple four-roomed cave in the hillside, together with the mule that pulled his cart, and the other animals that shared his cave. If this sounds a primitive way of life, at least the cave kept him warm in the winter and cool in the summer; and he was surrounded by the vines that needed tending.

Today his land is cultivated by a modern winery – Casa de la Ermita; but many of his original vines are still producing fruit 70 years on, contributing to the bodega’s output of award-winning, intense, fruity wines. From Pedro’s humble beginnings, the winery has expanded, employing 25 people full-time (many more at harvest), and producing over a million bottles of wine each year. These are exported to around 40 countries worldwide, with only 15 percent of the wine being consumed in Spain. At Casa de la Ermita, tradition and development sit comfortably side by side.

“For a long time we have been cultivating our traditional grape, the Monastrell. Now we have 200 hectares and many varieties. The winery was built in 1999, but the vineyard is very old, coming from the third generation,” explains Lorenzo Banos, Export Director at Casa de la Ermita.

Casa de la Ermita is just one of over 40 bodegas in the Jumilla ‘Denominación de Origen’. Several of these can be visited along a well-signposted wine-route; and being only an hour from the coast, they are within easy reach for the day-tourist. 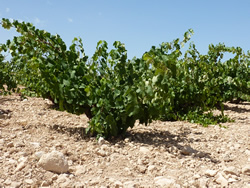 The region is not well-known among wine enthusiasts; and at first glance, it doesn’t look an obvious choice for wine production. The soil is dry, chalky and full of rocks; the average altitude of vines at Casa de la Ermita is 700m above sea level; and the traditional Monastrell grapes grown there in abundance have been historically vulnerable to pests. Yet, strange as it may seem, these features combine to provide ideal conditions for the vines of the Jumilla district. What is their secret?

Casa de la Ermita is situated on the slopes of El Carche, the second highest mountain in the region of Murcia. At 1,371m above sea level, it is slightly higher than Britain’s highest mountain, Ben Nevis. It is hard to imagine vines growing half-way up Ben Nevis; yet Lorenzo’s vines grow at altitudes between 400 and 900 metres. This environment provides the vines with a wide temperature variation. This allows the vines to rest from the heat at night, but benefit from it during the day.

“It can be a difference of 20 degrees between the day and the night – in summer and in winter. At night, in January or February, it can be minus five: but after the sun rises, by one o’clock, then it is 15 degrees. This is very good for the health of the vines; they need this.”

As if to confirm the point, as I drove away later in the afternoon, I passed an incongruous warning-sign on the road – a red triangle with a snowflake in the centre – just as my car’s thermometer was touching 40 degrees C.

If the Monastrell grape enjoys the local climate, it is also true that it thrives in the local soil. This seems hard to believe, given that there is little sign of soil as we know it – only pale yellow rocks strewn everywhere. 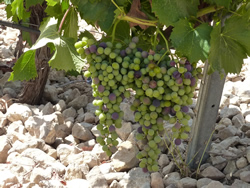 Yet, remarkably, the Monastrell vines are unique in their ability to grow grapes in this soil without needing any artificial irrigation. They thrive on the natural rainfall of just 250-300mm per year.

“They are the original grape,” Lorenzo tells me. “That is why they were brought here. The other kinds of grape that we have – Shiraz, Merlot, Cabernet Sauvignon, Tempranillo, Petit Verdot – we need to give artificial irrigation. But the Monastrell requires just the rain from the sky.”

The region also benefits the Monastrell grape in providing a natural level of pest-resistance. At the beginning of the 19th century, Monastrell (also known as Mourvèdre in France, and Mataró in Australia) was widely grown across Europe. Towards the middle of the century, however, widespread attacks from the phylloxera louse devastated vineyards. A solution was found in grafting new vines onto phylloxera-resistant rootstock: but Monastrell did not take well to these, and consequently became far less widely grown. The soils of the Jumilla district, however, make it hard for the pest to establish itself – just one more reason why Monastrell continues to be ‘the soul of Casa de la Ermita.’

“The stony, rocky soil, makes it more difficult for phylloxera to develop; 80 percent of the Jumilla area is not affected by it,” Lorenzo explains.

Although Casa de la Ermita has an international reach, it retains the flavour of a family-run business. 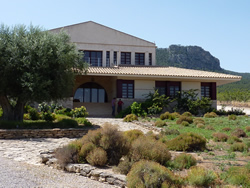 The modest bodega looks more like a modern farmhouse with outbuildings, than the kind of factory-style wineries found on the outskirts of Yecla and Jumilla. In its front garden sits a huge, 200-year-old olive tree – the origin of the company logo – and its front steps and foyer have the feel of a small country hotel. Inside, a staircase curves up to the first floor, its walls lined with framed certificates of the many awards the winery has received. A modest shop sells examples of Casa de la Ermita’s product: this includes dessert wines, oak-aged crianza, reserve wines, and organic wines – which the bodega was the first in Murcia to pioneer. In addition to the rich, fruity, Monastrell grape, it also produces wines from Petit Verdot and Viognier varieties, as well as blended wines. Thirty-five other varieties and hybrids are being continually tested in an experimental plot.

I asked Lorenzo what surprises people the most when they come to visit:

“When people arrive, and see the winery and the vineyard around it, they are amazed at this beautiful valley under the Carche mountain, a protected area. And when people come here to Jumilla they don’t expect the high level of quality from the Monastrell grape.”

The taste of success

When it comes to tasting the wines, the results are indeed impressive. Monastrell grapes typically have a high tannin content, which can confuse the palate of those used to drinking only softer wines. Part of the skill of the winery is in balancing these flavours, to produce a rounded wine. The flavours can be controlled by choosing when to harvest the grapes, adjusting the temperature of fermentation, giving the tannins time to settle during a period of storage, and through careful blending with other varieties.

One of the wines that has received particular attention is the Casa de la Ermita Crianza, a blend of Monastrell, Petit Verdot, and Cabernet Sauvignon. In the past decade it has picked up around 30 awards, including eight gold medals – a testimony to the innovation and skill of the Casa’s accomplished oenologist, Marcial Martínez Cruz – who was born and brought up in Jumilla. In judgements, the blend has consistently scored in the high 80s and low 90s. The Crianza (literally, ‘breeding’) is aged in oak barrels for nine months. Its ‘nose’ has been described as offering intense, mature black fruit (blackberry and prunes) together with hints of thyme, rosemary, minerals, cedar, clove, cinnamon and cocoa. The taste is juicy and well-structured, with tannin balanced and well-integrated. For those who enjoy an intense, seductive, fruity wine, this promises a garden of delights.

Casa de la Ermita was also the first winery in Jumilla to produce a wine solely from the Petit Verdot variety. This, too, has won a slew of awards (18, including four gold). The grapes are harvested late in the season, and fermentation takes places at relatively high temperatures. The wine is seasoned for a full twelve months in oak barrels. The result is a sumptuous, strong, elegant wine, set apart from the fruitier wines by its understated, subtle flavours. Its ‘nose’ boasts aromas of ripe plum, with floral notes of violet and lavender, and a hint of orange. An initial sweetness on the tongue gives way to over-ripe black fruits with hints of chocolate and coffee, and a fresh, balsamic finish.

If Casa de la Ermita is anything to go by, it is clear that the wines of Jumilla have come of age in the past decade. Murcia may not be the best-known of the Spanish wine regions, but being within a day-trip from popular coastal holiday destinations such as Alicante, it is one of the more accessible. Those willing to leave behind the sun lounger for the day will more than be rewarded: a whole world of wine is waiting to be discovered..

Links:
Casa de la Ermita wines can be ordered in the UK through good wines for you

More details of the wines produced at Casa de la Ermita can be found on their website:
http://www.casadelaermita.com