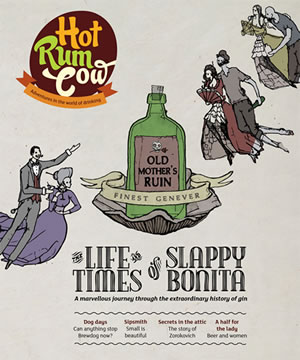 Hot Rum Cow, the fantastic new magazine about adventures in the world of booze, has been launched. Issue one of the 100-page quarterly is available now in selected London newsagents or direct from www.hotrumcow.co.uk. An iPad app edition is also available from iTunes: http://tinyurl.com/cu893b5.

“There is currently a surge of consumer interest in high-quality independent drinks, particularly in the beer and spirits sector, and this is the perfect time to launch Hot Rum Cow,” says Publisher Fraser Allen. “There are several very good food magazines out there but the drinks market is confined largely to trade titles or self-regarding connoisseur mags. Hot Rum Cow will appeal to anyone who is curious about outstanding or unusual drinks and the stories behind them. It’s about beer, wine and spirits but it’s also about history, culture and people. It’s funny, it’s intelligent and it’s packed full of unusual information and tales. It’s also beautifully designed with a striking use of illustration.”

The magazine is intended to be a collectable series, printed in a 240mm x 200m format on uncoated stock. Only 2,000 copies of the launch issue have been printed.

What about the content? The cover feature for issue one is The Life & Times of Slappy Bonita – an in-depth look at the fascinating history of gin, from its origins as a Dutch medicine, to its role as tipple of the drunken masses in 19th-century London, to its colonial heritage and modern renaissance. We also taste-test the best tonic waters and top chef Tony Borthwick creates a gin-themed three-course dinner.

Other articles, written by the White Light Media team and specialist contributors, include: the extraordinary tale of Dan Edelstyn and his Zorokovich Vodka, a delve into the strange world of spirits flavoured with meat and fish (euggh); the historic love-hate relationship between women and beer, a trip to a new vineyard – in Scotland; great ideas for wine cocktails and the hilarious exploits of booze comedians Ben McFarland and Tom Sandham. But there’s much more. To get a good taste of the writing you can read three of the articles now at www.hotrumcow.co.uk

Beer Pairing: give wine the night off

Why whisky and water should always go together

For the love of port!