close
From click to clink, the best deals on the web
Despite the very English drink’s troubled past, these days gin is synonymous with a stylish dose of refreshment. In recent years there has been an explosion in the variety of flavours that gin offers, as can be seen in the rise of countless ‘boutique’ style brands such as Sipsmith, Blackwoods and Brockmans.

Olivier from theginblog.co.uk explains the increasing popularity of upmarket gins: ‘Bombay Sapphire and Hendrick’s Gin really opened the way for new brands to emerge in the market, leading with great packaging and unusual botanicals such as rose and cucumber.’   These brave new brands, says the blogger, paved the way for an ever increasing variety of small and interesting gins with heaps of character.

‘Craft distilling is also really taking off in the UK with new distilleries and small producers like Sacred Gin opening and specializing in gin. This combination has led to an exciting time for the category and a renewed interest in what is a quintessential British spirit,’ adds Olivier.  Yet it’s important to remember that gin, more than any other spirit, has had a troubled yet fascinating journey from rags to riches.

A short history of gin

Although Dutch physician Franciscus Sylvius is often credited with inventing gin in the seventeenth century, it had probably been around for some time. However it certainly became readily available in this period, thanks to its supposed medical properties. The curative’s harsh flavour was tempered with addition of botanicals, especially juniper.  As a result this infusion became known as Jenever (the Dutch word for juniper) and it is the berries of this plant that give modern gin its definitive taste. Since then Jenever and gin have become very different drinks in their respective countries. 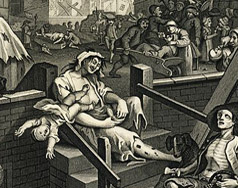 When the Dutch head of state William of Orange became King of England, gin followed in the wake of his royal personage. Shortly afterwards, the wars with France that William fought in his homeland provided a chance for the ordinary British soldier to develop a taste for gin. This is where the term ‘Dutch courage’ comes from.   Soon gin, or ‘mother’s ruin’ as it came to be known, was the drink of the British underclass. The explosion of gin consumption in the early eighteenth century was the result of a patriotic tax levied on imported spirits, especially French brandy, by the British government. As a result poor Londoners took to gin in droves – raw alcohol could be distilled from any grain that was going.

The poor quality of this concoction was then masked by whatever extra ingredients were around, in some instances turpentine was added for an additional intoxicating kick.  The now ubiquitous combination of gin and tonic came about during the British conquest of India. Drinking tonic water was compulsory in the ranks due to its anti-malarial properties. Gin was used to offset the bitterness of tonic and no doubt gave the troops a welcome alcoholic incentive to drink up their medicine.

Today, gin is among the most popular cocktail ingredients. It has recently developed a particularly dedicated following in Spain, where specialist ‘Gin Tónica’ bars now serve the spirit from menus, and create unique mixers to complement the character of each gin.

Jassy Davis, the food writer and gin drinker behind the blog ginandcrumpets.com, thinks that this recent increase in popularity can be put down to gin’s essential qualities compared to other spirits.

‘While gin sales are generally declining in most countries, sales of premium gins are up. Unlike premium vodkas, where the emphasis is often on branding and lifestyle, premium gins focus on the craft that goes into making them and the richness of the flavours.   Gin is being viewed more like premium whiskies and enjoyed for its own qualities – although, of course, it’s still a great base for cocktails.’ With its place on the shelves of specialist upmarket bars and restaurants more secure than ever, this one time bad boy of English drinking is now enjoyed by a flavour hungry international clientele. A far cry from the gin shops of eighteenth century London.

Shaken not Stirred – The Story of the Martini