The origins of Champagne Henri Giraud date back to 1625… The Hémart family, contemporaries of Henri IV and his descendants, settled permanently in the town of Aÿ in the early 17th century. The family history is deeply rooted in Aÿ and became closely related to the extraordinary destiny of Champagne from the 18th century onwards.

In the early 1900s, Léon Giraud, Cavalryman in the Battle of the Marne, married Lady Hémart and set upon rebuilding the beautiful family vineyards, which had been devastated by phylloxera. Today, Claude Giraud, the 12th generation of the Giraud-Hémart family, is at the helm and presides over this “Maison de Champagne” (UMC member) whose iconic vintage cuvée is named “Argonne”.

Building on the three historical pillars of the Maison Henri Giraud (Aÿ Grand Cru, Pinot Noir and barrels from the Argonne forest), Claude Giraud has since 1990 reconnected with Champagne’s past and started crafting again oak barrels from Argonne, the famous Champagne forest located about 35 miles east of Reims. This oak forest is where for more than ten centuries the famous barrels of Champagne came from.

Every year, international experts meet in the Maison’s ‘Ateliers’ to understand the impact of different terroirs and geological composition of the soil of the forest on the taste and texture of the wines. Salinity, intensity and aromatic complexity of Champagne Henri Giraud make it one of the jewels of excellence of the region. With only 250,000 bottles produced, including only a few thousands for its vintage cuvées, these Champagnes are now sought after by collectors and fine wine lovers from all corners of the world. 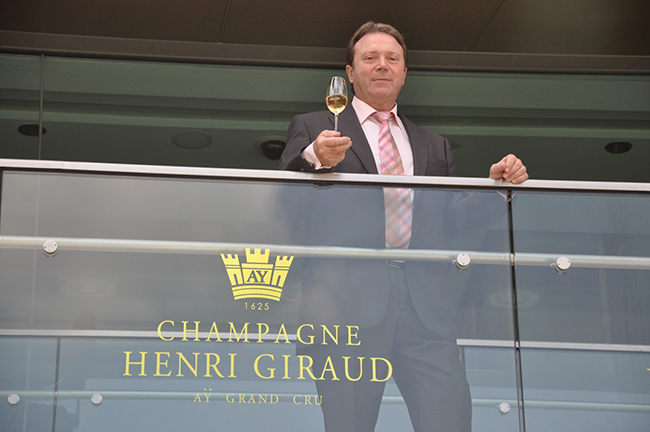 Robert Parker writes: “This may be the finest Champagne house virtually no one has ever heard of. These traditionally made, wood-aged Champagnes include a luxury cuvee, the Grand Cru Ay Fut de Chene, which is reminiscent of Krug in a slightly less oxidized style.” Similarly Richard Juhlin has described Fût de Chêne as “reminiscent of Krug Grande Cuvée with a bit of exoticism.”

As mentioned their top release for several years was “Fût de Chêne”, which was released in strong vintages. We have a mixed case of these. In 2002 they decided to blend the best 5/6 vintages of Fût de Chêne and make the prestige cuvée Argonne. Named after the forest where they source their oak barrels. The wines are vinified and aged in oak for a year before 7-10 years on lees in bottle. The 2004 was released in 2014.

Tasting Notes:   Jancis Robinson MW tasted there recently and is going to publish notes soon. Parker has notes on some of the mid 1990s Fût de Chêne wines which make up the Ennéade cases. Galloni is the biggest critic to have tasted at Giraud recently and published notes…

2004 Argonne:   “Giraud’s flagship 2004 Argonne continues to come together nicely in bottle. The interplay of power and energy is compelling. With time in the glass the 2004 becomes richer and creamier, yet it never loses its essential underlying energy. Hints of dried pearl, almond, smoke and spice add shades of nuance on the warm, resonant finish. The 2004 is 75% Pinot Noir and 25% Chardonnay, fermented and aged in barrel.  94 points. Drink now – 2024.” Antonio Galloni, Vinous, July 2015

MV Rosé:   “An addition to the range, the MV Fut de Chêne Rosé was introduced to replace the Code Noir, which as I have written in the past, at times was problematic in its aging curve. A wine of real precision and energy, the MV Rosé is impeccably balanced throughout, with persistent veins of chalky minerality and acidity that give energy to the red berry, kirsch and floral flavors. The Fut de Chêne Rosé is 80% Pinot Noir (including 5-6 still Pinot) and 20% Chardonnay. Disgorged June 26, 2014. 94 points. Drink now – 2022.” Antonio Galloni, Vinous, July 2015 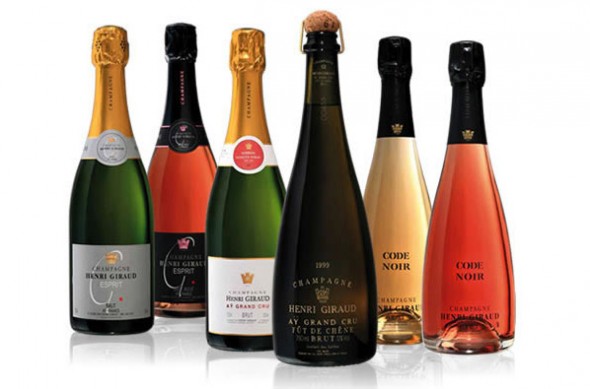 Code Noir:   “The NV Code Noir, 100% Pinot Noir, presents the richness and power of Aÿ in its ample, broad-shouldered personality. An exotic mélange of honey, tropical fruit, orange jam, spice and vanillin fleshes out in the glass. A year in 100% new French oak barrels adds considerable texture and sweetness, both typical of the higher-end wines in the range. Giraud has since transitioned to the new Fut de Chêne Rosé, but at its best, Code Noir was a gorgeous Champagne. Disgorged November 27, 2012.  93 points. Drink now – 2020.” Antonio Galloni, Vinous, July 2015
Hommage:   “Giraud’s NV Hommage François Hemart is a consistently delicious wine, as it is once again this year. Smoke, slate, almond and dried pear meld together in an approachable, open-knit Champagne that drinks well today. With time in the glass, the richness of Pinot becomes more apparent, but the Hommage remains the brightest and most approachable of the wines in the range. Disgorged June 4, 2014. 89 points. Drink now – 2020.” Antonion Galloni, Vinous, July 2015
Henri Giraud Rosé:   “Giraud’s NV Brut Henri Giraud Rosé is endowed with lovely overall balance and depth. Creamy and expansive on the palate, with plenty of support from the French oak, the Brut Rosé is absolutely exquisite from the first taste. Hints of rose petal and crushed red berries add the final shades of nuance. This is a very pretty, inviting Rosé from Giraud. Disgorged March 24, 2014.  92 points. Drink now – 2023.” Antonio Galloni, Vinous, July 2015
Esprit Brut:   “A dense, powerful wine the NV Esprit races across the palate with striking depth, nuance and resonance. Almonds, smoke, hazelnuts, spices and dried pears blossom in a rich, ample Champagne that captures the essence of Aÿ. The Esprit is 70% Pinot Noir and 30% Chardonnay done mostly in steel, with 10% of the wine vinified in oak. Disgorged April 23, 2014.” 91 points. Drink now – 2020.” Antonio Galloni, Vinous, July 2015
Previous Post
Next Post