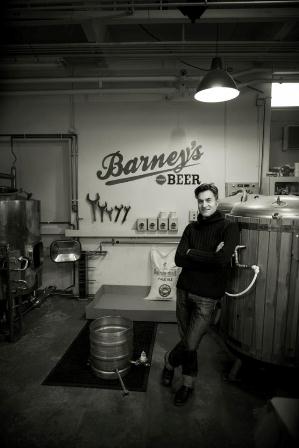 If, as many people will tell you, brewing is the new rock n roll, microbrewer Andrew ‘Barney’ Barnett doesn’t strike you as much of a hell raiser.

Though other Scottish brewers such BrewDog go out of their way to cultivate a bad boy image, Barney is a polite, gently coiffured character, contentedly absorbed in the creation of interesting beers.

The owner of Edinburgh’s only microbrewery; Barney’s background is far more eclectic than his reserved manner implies. In fact, with years of experience as both a gigging musician and a marketing professional for international spirit giant The Edrington Group; the brewer is no stranger to high-living.

Yet Barney is quick to point out the one crucial difference between his previous professions and his current one.

“It’s different in that the performance is just having the beer in a bar, the performance is being done by the beer, not me, so all the hard work gets done here back at the brewery and the beer is the one that gets to hang out in the bars and perform,” reflects Barney.

“Although I could do with spending more time hanging round bars like I did when I was a musician if only to encourage people to drink more of my beer,” he adds.

Whatever the parallels between beer and music making, Barney has found a highly appropriate setting for his microbrewery – Edinburgh’s labyrinthine new arts centre Summerhall.

Barney explains how the idea of using a section of the arts complex as the site for his brewery came about:

“They first did a festival thing here in 2011, and my next door neighbour told me to give them a shout, as they were going to start opening the place up for workshops and studios, pretty much all arts and creative industry stuff…”

“The curator here is really avant-garde and is responsible for stuff that is fantastic and also completely out there,” explains Barney. 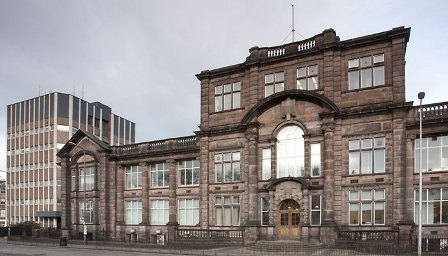 In the words of its promoters the former vet school aspires to be ‘a cross cultural village where arts and sciences talk to each other’. This sprawling set of buildings from the past two centuries is now the site of numerous artistic happenings. Its central courtyard and bar is exactly the kind of place where you can picture tech geeks rubbing shoulders with performance artists and it’s at the back of this area that Barney’s Beer is located.

Yet Barney is far from the first intrepid brewer to call Summerhall home – a fact that probably helped him get ensconced in the first place.

“I think letting me move in here tied it back to a bit of heritage for Summerhall,” he says.

Before the buildings became a vet school, there was a brewery at the site for much of the nineteenth century, employing up to 120 people.

“The efficiencies were a bit different in those days; it was a bit more labour intensive; but it was still a sizeable brewery,” he says.

Edinburgh was once among the top brewing cities in the world. At the beginning of the twentieth century there were around 35 breweries in the city. Today the only survivor from this era is real ale powerhouse Caledonian Brewery. As the operator of the only craft brewery operating within the city, Barney is keenly aware of this backdrop.

Yet, from packaging to palate, there could hardly be a beer brand more distinct from real ale (even if the beers themselves do meet the Campaign for Real Ale’s stipulations).

“I don’t tend to use the term real ale that much, because I think that the market has moved beyond that in a way,” says Barney.

So how does Barney characterise his style of beer making?

“It’s a bit of a mish mash really – I’ve got a graphic style that has more in common with German-American 1950s beer, then I’m on the site of a nineteenth century Scottish brewery, so there’s a bit of a mix of influences and of course a whole new wave of beer styles is taking over thanks to the interest in microbrewed beer.”

Yet that’s not to say that Barney’s Beer is consciously radical – each bottle assures the drinker that its contents is “100% natural” and includes “no monkey business”.

This promise is borne out across Barney’s range – especially the transatlantic brew ‘Volcano IPA’ and the brilliantly balanced notes of ‘Red Rye’ – a truly accessible rye beer if ever there was one. 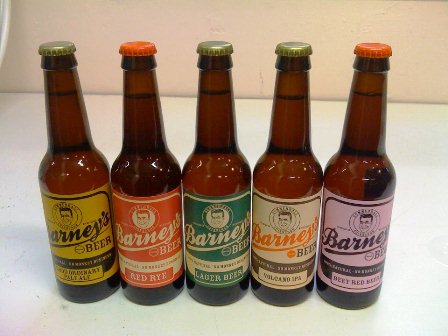 As the only microbrewery in a city with more taps per head of population than any other, Barney is proud of the fact that his beer has the potential to be, first and foremost, a local tipple.

“Ideally I would love to have all my sales within three miles of here and if I could make enough money out of that I’d be happy with it,” says Barney.

With numerous eateries and drinking dens doing a roaring trade thanks to hordes of tourists, students and festival goers, Edinburgh is perhaps the ideal spot for pushing local beers.

“Local outlets are saying that my beer is working really well now: especially when people know that it’s brewed a few hundred yards away,” he adds.

On the other hand, a consumer base as vibrant as that in Edinburgh is always going to come with a lot of competition, and Barney does face issues when it comes to working with pub chains.

“With the way that the market works now, for brewers of my size, I’m a guest beer on a long list… I can’t brew enough beer to satisfy a pub chain. I do have to look a bit further afield,” says Barney.

In this sense micro brewing is a bit of a double edged sword and keeping it truly local in a world of massive conglomerates is no mean feat. Barney takes a typically balanced view on this subject:

“It’s good in that there’s loads of choice for drinkers, but I sometimes get a little bit irked especially when bigger brewers attempt to jump on the small brewer band wagon,” says Barney.

On the other hand, though Barney’s Beer may be little more than a minnow in an ocean of big brewers and demanding pub chains – the flexibility offered by micro brewing may be its biggest strength.

As Barney is keen to point out this parallels changes that have taken place in the music industry.

“It’s all happened so quickly – and it is all in keeping with the increase in home recording that’s been going on with music…The kind of beer that I make and the kind of company that I have is becoming of interest to younger drinkers,” he says.

“People now have their own record labels and can release really interesting stuff,” enthuses Barney. 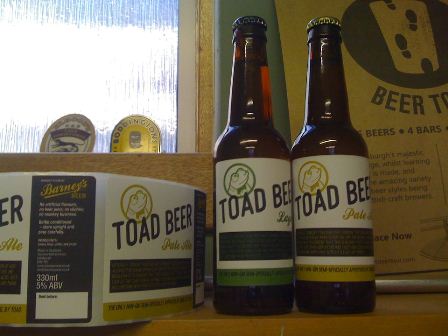 Barney himself has been keen to make these links in practice, by producing a charming batch of beers for independent Edinburgh record label Song, By Toad, for example.

Barney is keen to work with interesting organisations and events on such one off beers – on one condition: “I’m quite into doing collaborations…I’m quite happy to work with people as long as whatever goes on the label is good, and if I don’t like it then that’s it… being small means that I can produce beer concentrated on one event.”

There’s also talk of a bespoke festival, tapping into the thriving scene revolving around Summerhall.

“There’s a traditional style of beer festival that’s a bit naff. But there’s also a new wave of beer festivals that are happening, a few of them organised by breweries themselves, that are just a bit cooler and want to attract a different audience,” he points out.

As the agile and increasingly popular practice of micro brewing begins to make itself known in Scotland, branding is key. The highly personal and paired back nature of Barney’s output is a great example of how a small operation can get noticed, although as Barney himself points out, part of that is to do with a wider shift in the market.

“It’s funny because a lot big beer brands suddenly look a bit naff. I mean, I used to work for them and for years they were kind of cool, but not in the way that small microbreweries can be now. I like to think my stuff’s quite cool, but there’s some stuff out there that is so cutting edge,” he says.

Modesty aside Barney’s work at Summerhall couldn’t really get more cutting edge – in fact innovation is the subject of his next collaboration.

“I’m doing a tie up with Edinburgh International Science Festival, Summerhall will be one of the  venues, so I’m going to do some workshops and we’re making a science festival beer using the first yeast that was ever isolated by Emil Christian Hansen, who worked for the Carlsberg laboratories in 1883, ” says Barney.

Although it might be ironic for Barney to be celebrating the legacy of a brewing juggernaut like Carlsberg, as with everything that takes place at this microbrewery, it’s about finding opportunities to produce a good batch of beer.

“Prior to Hansen most breweries would have to throw away about one in five of their brews.”

Clearly enthused at this process, Barney explains how this Science Festival beer will be created.

“I’ve got a copy from the National Collection of Yeast Cultures of that actual strain of so I’m going to use that to brew a lager style beer that will be a bit of a hybrid.”

“150 years ago brewing was kind of like the digital world is now; loads of technological breakthroughs were being made as a consequence of brewing,” he adds.

Both historically and during its recent renaissance, it would seem that brewing can be as exciting an occupation as any. For Barney though, it’s not just about ideas, but also involves being up to his elbows in the brewing process for nine hours at a time, or slogging through the process of bottling his own beer by hand.

In many ways Barney is a paragon of the new micro brewing movement – a onetime rock n roller turned jetsetter, turned brewer – who has decided to burrow back into the mechanics of his first love. Barney’s varied background has allowed him to bring a frenetic character and creativity to a sector that until recently was not existent in Scotland.

His beer tastes really good too.

4 Differences between Ales and Lagers