After a century of making cider, the Benedictine monks of Ampleforth Abbey in North Yorkshire are now reviving a medieval recipe for beer. The formula was carried away with the merry monks when they were exiled to France at the beginning of the 17thC following suppression of their Order under Elizabeth I.

There they continued to make the beer, just for themselves at first. Later, they brewed for the local duke, and eventually – long before le football was invented – they exported their beer all over Europe. The beer was brewed in the English style, but double-fermented, and made using hops and barley. 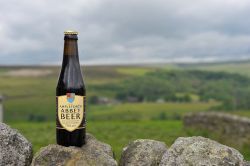 By all accounts it had a malty, fruity, hoppy flavour, and a champagne sparkle. The recipe for ‘la biere Anglaise’, as it became affectionately known, was carried back to England with the monks when, in 1793, they fled renewed persecution from revolutionary France.

Arriving back in England – curiously – they ceased brewing, and the recipe lay dormant in the community’s archives. The reason for reviving the recipe today is as practical and earthy as the production process itself. Sean McFetritch, Director of Commercial Operations at Ampleforth, explained:

“Ampleforth is a big place, and there are lots of buildings that need upkeep. The monastery itself, and the Abbey, need work, and it’s a way of generating additional revenue to help pay for the upkeep of the buildings. But also, the recreation of the traditional monastic art of brewing is going to be welcome at any time.”

This new venture into brewing is part of a long tradition of producing alcoholic drinks. The monks of Ampleforth are well known for their cider production, which grew originally from the selling of apples at the monastery gates. Today, the monks form a workforce producing over 20,000 litres of cider, cider brandy, and apple liqueur every year. Spread over two hectares, their orchards contain over 40 varieties of apple, and around 2,000 trees. With so much alcohol being produced, you might wonder whether the monks themselves get to enjoy the fruit of their labours.

“Yes, it’s been very traditional that the monks have a small glass of beer at lunchtime. This goes back a long time, when beer was safer to drink than water. They will be drinking Ampleforth beer at lunch once again. St Benedict says we should do all things in moderation, so I think he approves!”

Visitors to the Abbey can take a tour around the orchard and cider mill on Thursdays in May and June – and sample the 7%ABV beer.

4 Differences between Ales and Lagers